This piece I am about to introduce was finished in late-2018 and it is the latest artwork in my La Toussaints-series.  Named “Silence is Golden” as a nod towards the images origin, this mixed media piece is an adaptation of a lithograph bought from my local brocante– where these types of pictures come a dime a dozen. 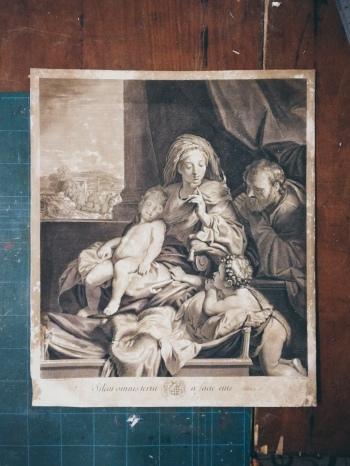 Lithograph of “The Silence” by Nicolas de Poilly 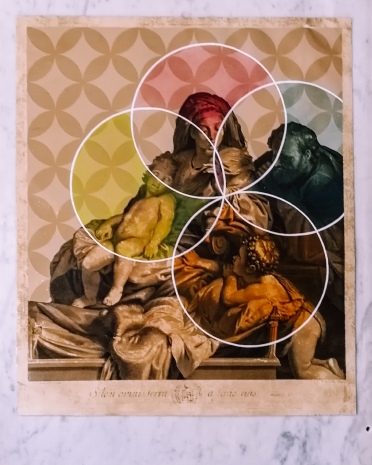 My lithograph was a copy of an engraving “The Silence” (ca. 1675-1693) by Nicolas de Poilly, who in turn was paraphrasing “The Sleep of the Child” by Charles Le Brun.  It is a cosy domestic scene featuring the holy family: Joseph, Mary and a plump baby Jesus, with John the Baptist.  Mary, who is seated at the centre of the composition, is holding her sleeping child while gently scolding the young John the Baptist for attempting to wake the Christ up from his slumber.  The inscription at the bottom of the print reads “Sileat omnis terra a facie eius”, (loosely following Habakkuk 2:20) and can be translated as “Be silent, O all the earth tremble before him.” (Image and Incarnation: The Early Modern Doctrine of the Pictorial Image, edited by Walter Melion & Lee Palmer Wandel, 2015)  My copy of the print likely dates to the turn of the 20th century if not a little earlier.  Despite of past restoration attempts in or around the 1930’s, it was in poor condition: damaged by the sun and insufficient framing.

My fascination of Catholic art goes hand in hand with my art education.  Like any keen student of art history, I quickly became familiar with the lore and symbolism of different saints, due to the nature of historic art that survives in Europe.  I was brought up in the fold of the Church of Finland, as an evangelic Lutheran, but I have no personal faith.  As a young atheist and a budding painter, I could not relate to religious art, but I admired the grandiosity of it.  I can appreciate the likes of Morgan Beatus (a stupendously illuminated manuscript of the Book of Revelations, circa 940-45), in awe of human imagination stemming from Christian piety and not feel the slightest sense of guilt or doubt about my own religious identity.  In that light, collecting fiercely Catholic lithographs and incorporating them in my own visual art feels only natural. 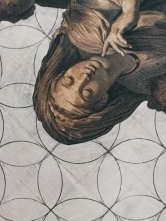 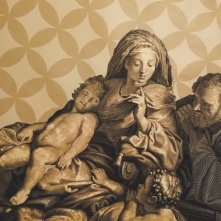 My style of creating new art out of the old is all about layering; adding elements with a distinctly different hand from the original artist and creating interest through contrast.  I am a lover of the decorative arts and these mixed media pieces allow me to explore the more maximalist side of my practise.  In “Silence is Golden” I chose to simplify the design of the original composition by removing the background altogether and replacing it with a straightforward pattern mirroring the colours of the print.  A separate geometric element inlayed with a selection of coloured washes in oil paint serves a decorative purpose as well as a vehicle to highlight the relationships between the prints subjects, beginning from the line of sight of the Virgin Mary.  Where my painted additions are substantial to the way this print will be viewed in the future, I don’t see myself as the sole author of this piece, rather than a curator of it.

Changing fashions have left these previously beloved images of devotion crumbling in their mouldy frames, sold for the price of live-love-laugh stickers.  Worn by the passage of time, unloved or simply forgotten, they remind me of my grandmother with her framed embroidery of a guardian angel, perhaps this is why I find them so irresistible.  By adding my own mark into a copy of a print or a painting I stand alongside the artists that created these images, on a direct line from the likes of de Poilly and Le Brun.  It is a very comforting thought. 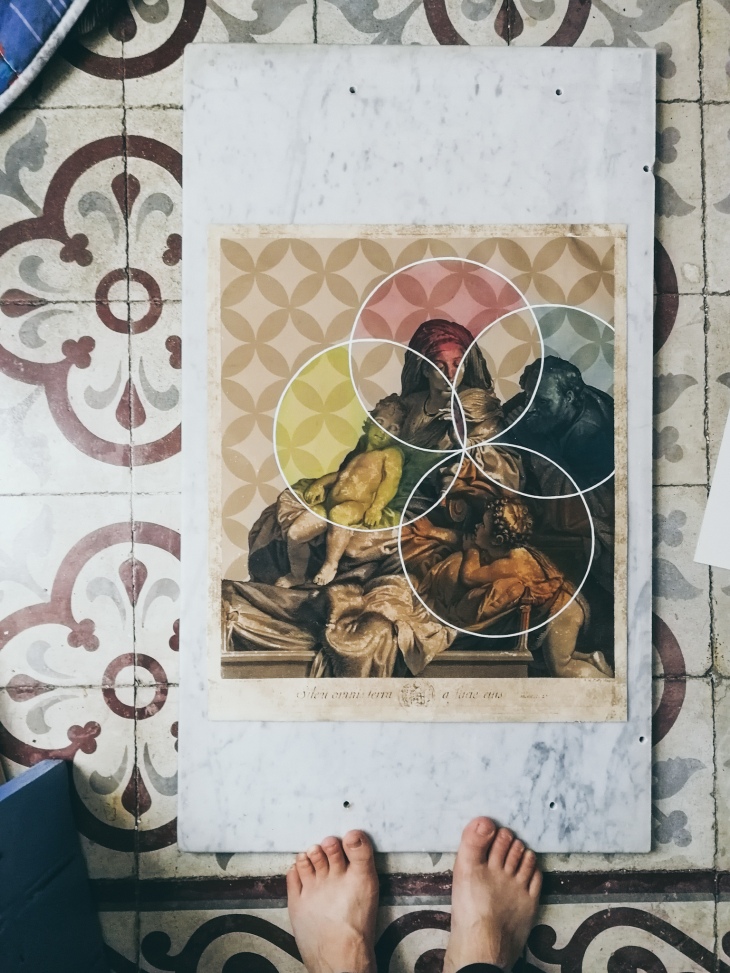 All the while I am actually recycling art.

For that, I feel downright saintly.

One thought on “Silence is Golden”