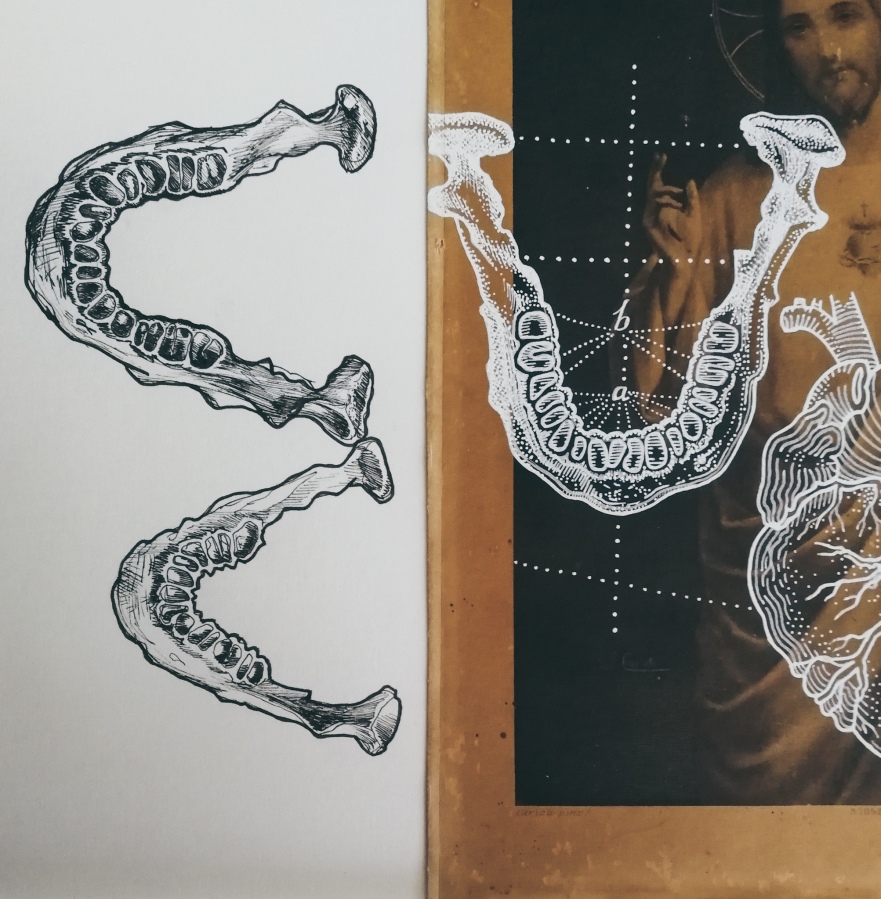 We all have hobbies, right?  Little bit of arts and crafts perhaps, going to the gym, cookery, those sort of things.  I personally enjoy long walks with my Alsatian Rusty, running… and reading about the many ways the human body has been mutilated in the name of science.  Strictly historically speaking.

Trust me, I am an artist.

All I can say in my defence is that it started with anatomy.  As a painter occupied with the obsolete and the ostentatious, I was preordained to find illustrated atlases of the human body fascinating.  The hyper detailed drawings of internal organs next to skeletons posed like marble statues of ancient Rome; what a delightful combination of the macabre and the medical!  I tried to envisage what it must have been like, in the early days of scientific surgery and the golden age of dissection, to depict a body like this – to maintain a clinical gaze in the most intimate of situations. 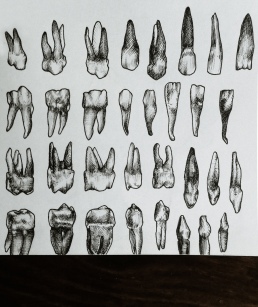 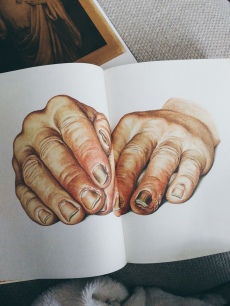 image from the Sick Rose

The history of dissecting cadavers is a murky one, entangled in the stories of the resurrection men, unscrupulous surgeons, stolen bodies and desecrated graves.  Having lived in Edinburgh, I could not avoid the ghoulish tale of William Burke and William Hare, a pair of friends turned murderers, who found a way to cash in on the lucrative body trade.  They were caught and punished, Burke ending up at the business end of a long rope with a sudden stop.  To add insult to injury, he was then publically dissected and his articulated skeleton was put on displayed at the Anatomy Museum at the University of Edinburgh where it remains to this day, alongside leather wallets made from his skin.  Interestingly, but not entirely surprisingly, Dr. Robert Knox who had paid for the victims suspiciously fresh corpses was vilified, but otherwise free to move on with his life.

Dr. Knox’s involvement in the corpse trade was by no means unusual: for him and his contemporaries, stolen remains were an unsavoury, but a necessary part of studying the human anatomy.  Before the passing of the Anatomy Act of 1832, bodies available to dissection were scarce, limited to those of executed criminals.  However, through a bizarre loophole in the law, stealing bodies was not illegal as long as the resurrectionist would not take the deceased’s clothing or grave goods.  Being poor highly increased your changes at ending up on the surgeons slab, but the wealthy did not entirely escape this gruesome faith either.  The fear of dissection was so great that graves were topped with heavy stone slabs, anti-robbing “cages” made of thick iron or simply guarded for a fortnight or so following a burial.  Alas, through sheer perseverance and widespread bribing of the officials responsible of safeguarding the sanctity of burials, the practice of bodysnatching continued until the 1832 Anatomy Act.  The new law allowed the unclaimed bodies of the poor or those who had died in public institutions such as poorhouses, asylums or hospitals to be dissected by medical students; a model adopted from France where the staff at the public teaching hospitals were free to study anyone who had perished under their care.

If like me, you enjoy browsing through books on Georgian and early-Victorian era medical illustration, take a minute to contemplate on the contributions of those anonymous dead who are immortalised in these beautifully morbid images.  A corpse of a small child stands next to no chance to have been acquired through any other than unscrupulous means as were the bodies of pregnant women, the simple reason being that visibly pregnant women were not hanged for the sake of public decency.  The Anatomy of the Human Gravid Uterus Exhibited in Figures by the famous anatomist William Hunter is a truly exquisite collaboration between a scientist and an artist, aided by the craftsmen who produced it in print, but there is little doubt that the women cut up and featured as anatomical specimen were anything but stolen from their graves. 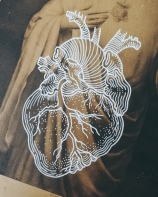 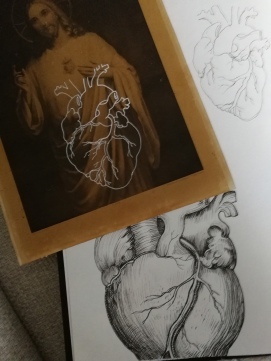 Corpus Christi by Tiina Lilja – work in progress, bones of the foot

As a painter, this is a legacy that I too must acknowledge if I choose to make work inspired by early anatomical illustration.  Choosing to talk about the underside of this age of medical history does not mean I am opposed to dissection of cadavers in any way.   I am simply presenting this argument as it directly inspired me to create the latest piece in my “Toussaints” series called “Corpus Christi”; a small mixed media piece, mere 19×27.5cm in size, consisting of a 1930’s lithograph of Jesus Christ layered with drawn anatomical motives in white ink and varnish.  “Corpus Christi”, literally the body of Christ, felt like the only name to give to a piece combining vintage style medical illustration and religious iconography.

While working on this piece I came across a quote from Richard Barnet’s delightful Sick Rose (or Disease and the Art of Medical Illustration), describing the body disenchanted through the advances in modern medicine, surgery in particular:

“No timeless mysteries, only temporary ignorance, no vital force or soul, only an endless dance of enzymes and substrates.”

As I have previously explained in relation to my usage of Christian imagery, disenchantment is indeed a good word to use when it comes to my personal relationship with God.  I am not a believer and although raised attending church I have no faith.  I hypothesise that once my life comes to an end there are no pearly gates for me; no salvation nor hell.  Simply, nothingness.  Denying the prospect of an afterlife does make me fear death – on the contrary.  Naturally, this world view influences my work.  By choosing to juxtapose the spiritual with the corporal in “Corpus Christi”, I aim to evoke the “vanitas” paintings of the past and the long tradition of “Memento Mori” imagery.  Dust to dust, and so forth.  For me, remembering death is a part of accepting death and making peace with it – seeing death as natural as life itself.

Beyond “Corpus Christi”, I have been drawing a lot lately, continuing my “Double Exposure” project.  (More about that in a bit.)  If you fancy reading more about the history of medical illustration or surgery, I warmly recommend the writings of aforementioned Richard Barnet.  Or check out the “Iconic Corpse”-series by Caitlin Daugherty on youtube if you are simply feeling a bit morbid – the one about Hayden’s head is particularly… well, funny.

P.S.  I could not fit this in anywhere on this blog, but check this out.  I would take anything coming out of Diego Rivera with a pinch of salt, but WOW.