See you on the social media

Having returned to the Edinburgh College of Art for her third year, Lilja was ready to continue her exploration of painting “things”: giant floating doll’s heads, things without a defined background and things that in essence were formed only by the background alone.  The continuous thread of wishing to combine traditional painting with purely decorative elements and empty surfaces can be seen throughout the artist work, from the earlier examples up until today.

As fascinating as the creation of intricate patterning was to Lilja, she found herself being drawn closer and closer to replicating physical substances: rubber, plastic, fabric and hair being her many favourites.  And this is where the sex toys enter the frame.  At the time of the first of her large scale dildo-painting, Lilja was, believe it or not, working her way out of using provocative subject matter in her paintings as she felt it was diverting the viewers’ attention away from what she saw as her true craft of simply painting “things and what they were made of”.  When the opportunity arose to get her hands on a box full of deliciously visual marital aids, glittery and girly with candy coloured transparent silicone, she simply could not resist the temptation, subsequently creating her most divisive series of works up to date.

“Gordon’s Gin” an oil painting dearest to the artist heart, not least as it was later bought by her future husband, arose directly from the desire of distancing her studio work from controversial subjects, becoming a fine example of her studies on glass, light and typography. 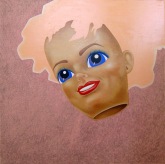 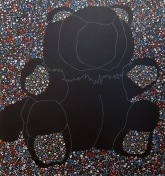 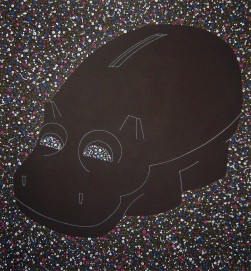 “Portrait of the Purple Pulser” by Tiina Lilja (2013) acrylic, oil and household emulsion on canvas (110x120cm)

Painter, mother to Rusty the dog, living her best life in the South of France View all posts by Tiina Lilja