See you on the social media

I have written a bit about the Two Brides before, first focussing on the element of painting a figurative portrait with the aid of photography and latterly to discuss the concept of failure as a creative practitioner.  This time, however, the piece is no longer a work in progress: I have indeed finished my first portrait of persons in nearly seven years.

If you are a regular reader of my wee blog or you found yourself here via Instagram, I imagine you to be pretty familiar with Two Brides already.  I sketched out the foundations for this artwork in January 2019 and having moved house and struggled with achieving what I considered a good enough likeness, I worked on it in little bits until I was happy with the costumes, background and, of course, the identifying features of the faces and hands of my two subjects.  This one is a fairly classical composition, drawing heavily on the look of the 1930’s studio photography this piece was directly drawn from.  Inspired loosely by the drawing Three Brides by Jan Toorop, a Dutch-Javanese symbolist, and the zeitgeist of the period between the two world wars, Two Brides was an interesting piece to execute from start to finish.

I feel any deeper analysis of my own work would be pure hubris, so this is where I will leave you, with my favourite work-in-progress shots of this painting and a promise to get back to you soon with news of new work! 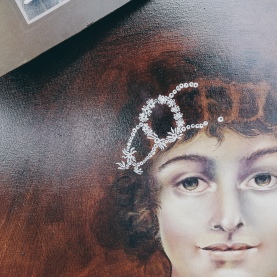 Two Brides, work in progress by Tiina Lilja – the studio dog likes to get in the way… 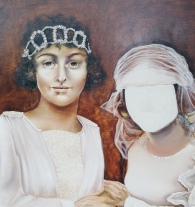 P.S. Oh yes, and here’s a wee bonus: Seems like the Snapchat genderswap-filter does work on paintings too!  I hope you find these as funny as I do…

#snapchatmanfilter works on paintings too… All the crackheads I ever loved, much!

#snapchatmanfilter works on paintings too… WHAT A HUNK 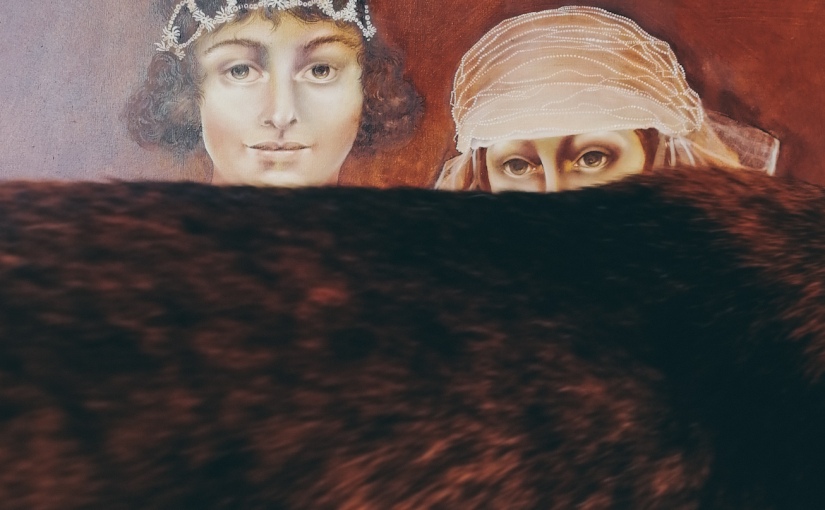 Having spent some time with my Double Exposure-project and learned a bit of printmaking, I am now back in the atelier, working to finish my portrait of the two brides from the 1930’s.  Although I initially enjoyed working on people and costumes again, one detail kept giving me nightmares: the second bride had a really unpleasant face.  Compared to a pretty successful portrait of the left hand figure, this one seemed both incomplete and overworked at the same time, making the whole painting feel unbalanced.  Now, I am not one to give up lightly, but having tried improving this face several times without significant success there was only one thing for it: paint it over and start again.

Two Brides, work in progress by Tiina Lilja – details of the old face before repainting

So, following a bit of doubt and self-pity, this is exactly what I proceeded to do… and boy I wish I had done it sooner!  Some weeks have passed since I got rid of the old face – when covering up large details with oil paint you must be careful about allowing adequate drying time, and I am now making great progress with this piece.  The new face is just how I wanted it: calm and soft featured, the perfect counterpart to my first figure whose confident form has hardly changed since I began the painting.

It is never easy to start again, having admitted defeat, even when you are confident about being able to turn things around.  I was terrified the old face was the best I could achieve and that kept me from making any radical changes for a long time.  Ultimately, if everyone was this terrified of failure, there would be not be a Guernica, or Sistine Chapel… no Jimson Weed.  True failure is not about ability or achievement at all – it is what you choose to carry with you when moving on from an adversary event.  In a society where an instant reward is expected to follow the slightest of efforts, it is natural to consider the absolutes of failure or victory as the only acceptable outcomes regarding work, education or personal development.  In reality, there is a huge and productive grey area between the two. 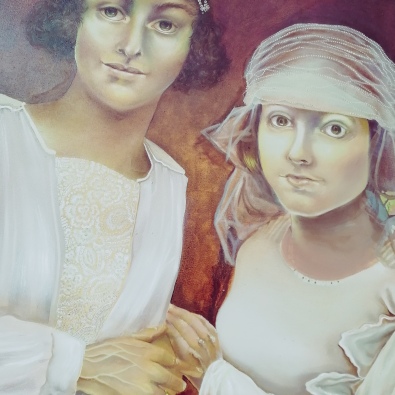 Two Brides, work in progress by Tiina Lilja – after repainting one of the faces

If I would only stick to painting what I know well my work would be pretty dull.  I paint high end goods for a luxury market so the pieces I put forward must be of a good standard, consistently.  This does not mean, however, avoiding challenging myself or aiming to create pieces that are merely good enough rather than good.  The world of fine art can be fickle; trends fly by and what constitutes as good varies from person to person.  The only way I can be confident about my work is to paint to a standard where I am happy with everything, first and foremost. 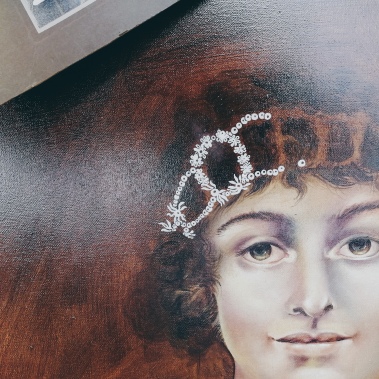 There is still a bit to go before Two Brides is finished, but I am on the right track again.  Being at peace with the faces, I feel optimistic about cracking on with other important details.  Today I am particularly excited about the pearl embellished head-dress of the first bride and the second ones capped veil – small details that are suddenly very visible without the distraction of that awful face.